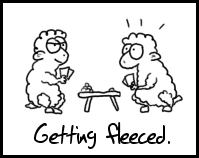 My very favorite animals to draw are sheep.  When drawing sheep, always remember...and never forget...all sheep must have googly eyes, as we shall see below.

Here we have a funny little yellow sheep with a pink face, standing out in a field of dandelions on a bright and sunny day.  Note the googly eyes. 
Below we have two cute cartoon sheep playing a game of charades at night.  Googly eyes will give your sheep good night vision. And making his first public appearance, this is Coco. A cute little brown cartoon sheep with a pink face, standing out in a field of grass, his little stick arms outstretched waiting for a big warm and woolly hug.  Coco's googly eyes are due to severe mental health issues.  He is unable to blink. Posted by Taylor Addams at 2:09 AM 0 comments

Just in case you were wondering... 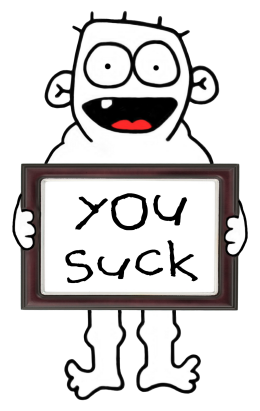 I got your suck right here, lady!
Posted by Taylor Addams at 10:38 PM 0 comments

When I was a little girl, I thought all boys were stinky. Now that I'm a big girl, I know all boys are stinky. Whether it's flatulence, beer breath or cheese feet, there always seems to be some foul odor emanating from the average male. But here's something I never thought about.  Ball sweat.  That is until recently, when I became aware of a product that will benefit any man with a smelly, sweaty undercarriage. That's right.  I'm lookin' at you, mister.  It's a long over-due product called Fresh Balls.  Their website says "... it won’t clump on your skin or leave a powdery residue in your pants."   Really?  Men actually powder their balls?  Why did I not know this?   Men are hilarious!

As soon as I became aware of this little tidbit, I found myself Googling sweaty balls (and who of us hasn't?) and came across a men's forum where they were discussing the powdering of balls.  This was my favorite:


"Real men shave their balls in a warm shower, then spray lavender Febreze (yes, on the balls), then sprinkle baby , then a second spray of lavender Febreze (in that EXACT order). Don't question the method, just try it. Your nuts will be tap-dancing in your pants. It's really a life of luxury for your boys and it just feels right, ya know."   No, I didn't know.  But I'm for anything that tap-dances in my pants.

And my favorite post found in a bodybuilding forum by a guy extolling the virtues of his balls:

"Some have compared my crotch to a warm Georgia summer with the children playing duck duck goose and grandma making fresh-squeezed lemonade in front while Uncle Biff changes the oil in his '55 Chevy."  I want to live in this man's pants!

My advice to all you malodorous men out there who want to keep your bean bags fresh, have your grandmother knit you a nice ball cozy or, oh...I don't know...maybe take a shower!!
Posted by Taylor Addams at 2:10 PM 0 comments

Looking for something fun & unique to express your gayness? (Suddenly I'm aware that gayness rhymes with anus!) Introducing Little Midge. Here she is waving her little rainbow flag, all set to march in the Pride parade. She isn't gay but that's OK.  As far as she's concerned, all boys are stinky. Little Midge is available at Ticklemonkey. Just click on the link below. 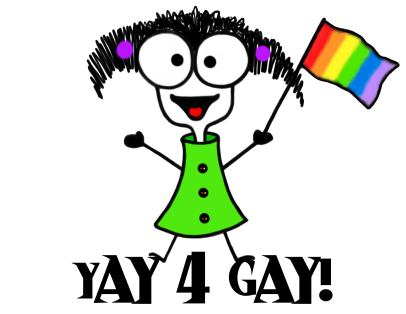 I GOT YOUR GAY RIGHT HERE, LADY!

Bookmark this on Delicious